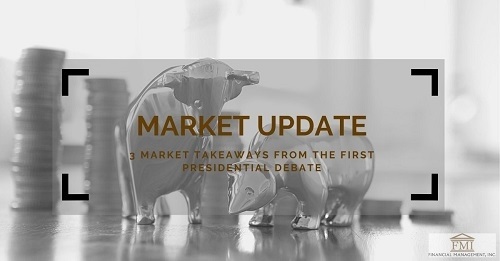 “Despite the chaos, viewers probably came out of the debate with largely the same impression of the candidates they came in with,” said LPL Financial Chief Market Strategist Ryan Detrick. “We expect markets will likely take a similar view.”

In our How Stocks Do Around The First Debate blog, we looked at market behavior in the days and weeks after first presidential debates in the past. Results have been all over the place, but on average the S&P 500 has been flattish and a little below the long-term average. That fits with several election patterns. Historically, the challenger, on average, has been viewed as the stronger performer in the first debate. At the same time, stocks tend to underperform leading up to a presidential election when the challenger ends up unseating the incumbent, although they tend to advance post-election no matter who wins. Put those together and it implies potential modest market weakness, or at least a lack of stength, after the first debate. However, the effect is likely temporary since debate bumps don’t usually persist. There’s also some impact from normal  September and October seasonal weakness, which may be in play around the the time of the first debate.

What did we actually see in the first debate from a market perspective? There were three key things we were following to gauge the likelihood of a market reaction:

The answer here is a resounding no. There was a lot of noise around how the candidates tried to portray each others’ policies, and there were actually some meaningful points buried in all the rancor, but we didn’t learn anything new.

Rather than looking at who “won” the debate, it makes more sense to look at the debate from the perspective of what each candidate needed to accomplish. While we believe the election odds remain closer than the polls indicate, former Vice President Joe Biden does appear to maintain a small edge, even with President Donald Trump’s apparent structural advantage in the electoral college relative to the popular vote that we saw in 2016. Trump probably needed to make up some ground in the debate. Biden needed to hold serve. The president’s goal for the debate was more challenging, especially in the face of historically steady polling and a “divided and decided” electorate. And with five weeks to go until Election Day and voting already taking place in several states, the need to make inroads is becoming increasingly pressing. No matter how you choose to call the debate, it probably did little to change minds in either direction. From that perspective, last night appears to be a lost opportunity for the president. The market’s likely interpretation of all this? No change.

Markets don’t unlike uncertainty, and they could be rattled, at least temporarily, by an uncertain election outcome or legal battle. There was no clear market indication overnight that election uncertainty increased, but we’re going to give this one a maybe. We’ll tackle the potential for an uncertain election outcome and what it may mean for markets in greater detail in LPL Research’s Weekly Market Commentary next week. We continue to think that a meaningfully contested outcome is unlikely, but as has been the case over recent weeks, the president continued to express skepticism about the legitimacy of the outcome under current procedures and last night he once again raised the possibility of mounting a legal challenge. It’s worth noting that legal challenges to a close election have been raised by both sides—by Republicans in 1960 and by Democrats in 2000. The idea of challenging a close election itself is not the same as challenging the legitamacy of the process. But the rhetoric has been escalating. We still believe that the remarks are more part of the president’s pre-election strategy than post-election intentions, but they may still add to perception of uncertainty, which will be an added factor to monitor as Election Day nears.

Any company names noted herein are for educational purposes only and not an indication of trading intent or a solicitation of their products or services. LPL Financial doesn’t provide research on individual equities. All information is believed to be from reliable sources; however, LPL Financial makes no representation as to its completeness or accuracy.

All index and market data from FactSet and MarketWatch.

This Research material was prepared by LPL Financial, LLC.

Insurance products are offered through LPL or its licensed affiliates.  To the extent you are receiving investment advice from a separately registered independent investment advisor that is not an LPL affiliate, please note LPL makes no representation with respect to such entity.