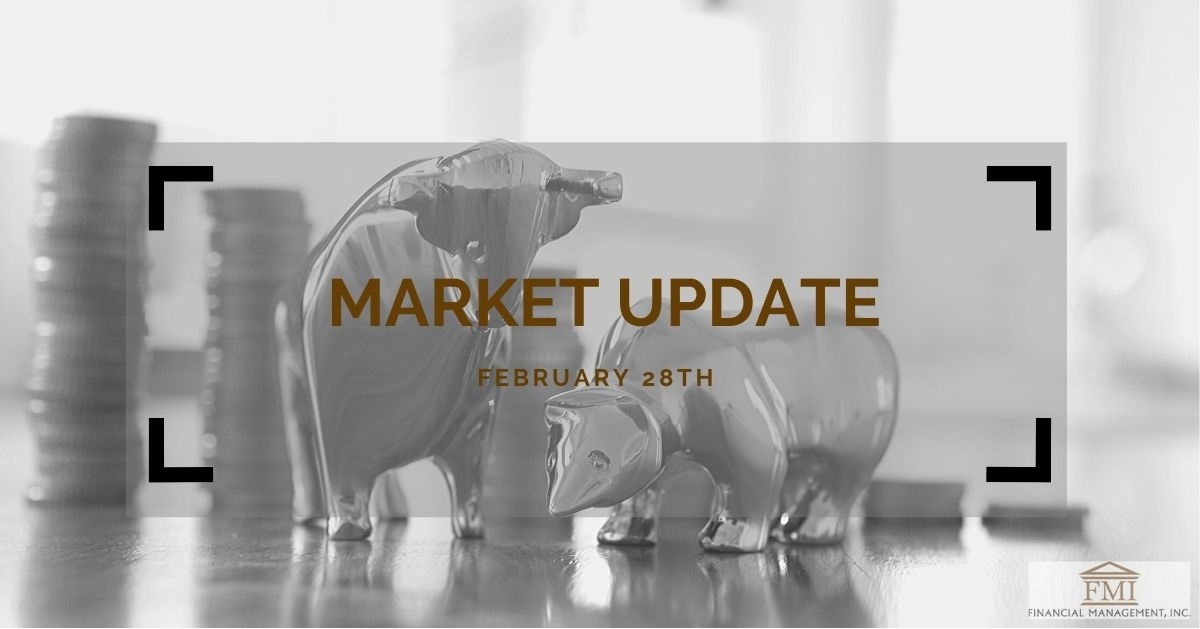 “The stock market takes an escalator up, and an elevator down,” is a classic Wall Street saying. The last week has sure felt like taking an express elevator down, as the end of February brought a historic stock market sell-off, with the S&P 500 Index moving from an all-time high to a 10% correction in only six days—the quickest such move ever. Along the way, the Dow Jones Industrial Average (Dow) experienced multiple 1,000-point drops, including Thursday’s biggest one-day point drop ever, adding to fears. As the coronavirus spreads around the globe, what was once a promising start to 2020 now has the S&P 500, Dow, and Nasdaq Composite all negative year to date.

To put the recent market weakness in perspective, in an average year the S&P 500 may pull back from its highest point to its lowest point 14% on average. Even in years in which the S&P 500 finished higher, it had a pullback of 11% on average. In 2019, when stocks gained more than 30%, we saw two pullbacks of more than 5% during the year. After a historically calm stretch to end last year and start this year, larger than normal volatility shouldn’t come as a surprise. We didn’t expect stocks to pull back this quickly, but we’re still within the normal range of market volatility.

We never want to minimize the loss of human lives, but keep in mind that less than 3,000 people have died from coronavirus globally so far, compared to the nearly 80,000 people who have died from the seasonal flu this year. Also, the number of active cases of coronavirus peaked at nearly 58,000 February 17 and has dropped to less than 44,000 now, a drop of more than 24% in less than two weeks. Also, the World Health Organization won’t call this outbreak a pandemic because of the extremely low mortality rate among young and healthy people. The mortality rate for people over the age of 80 is nearly 15%, but that drops to less than 0.3% for people under the age of 50, with rates even lower in developed countries. Here in the United States, 90 people have contracted the virus, but none have passed away.

What could be the potential economic impact? Any economic disruption in the United States most likely would be modest and short-lived. Domestic efforts to contain the virus should be more successful and have less economic disruption than in China. The epidemic could cut as much as 0.5% from gross domestic product (GDP) over the next several months, but as the virus becomes contained, it is likely we could return to trend growth during the second quarter. Globally, we can’t shut down a large portion of the world’s second largest economy (China) without experiencing spillover effects. China’s GDP could weaken significantly in the first quarter, but a potential return to trend growth by the third quarter may be possible if this outbreak follows a course similar to previous outbreaks (SARS, bird flu, swine flu, etc.).

As difficult as this week has been, it’s important to follow your investment strategies and focus on the long term. Based on history and solid economic fundamentals, a return to pre-outbreak levels of global economic growth and corporate profits appears likely. Investing fundamentals suggest that a second-half economic rebound, potentially aided by government and fiscal stimulus, could help extend this record-long economic cycle into 2021.

Please contact us if you have any questions or concerns.

This Research material was prepared by LPL Financial, LLC. All information is believed to be from reliable sources; however LPL Financial makes no representation as to its completeness or accuracy.